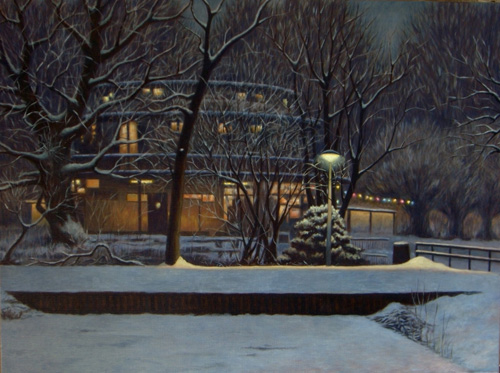 From my early years as an artist I was fascinated by 'nightscenes' like a (lighted) telephone boot or an exit of a cinema. I love the (quiet) atmosphere of night-time where things get lonely. The distant sound of a car or the slamming of a door. Specially I like to look how the light of street lantarns play with the surrounding objects and give them their long shades.It has something magical and it gives me a reflective mood. You could say like the song "A mood indigo" because in the evening the yellow light of day fades away to make place for Indigo-blue of the night (the colour I like the most!) My first inspiration was in my twenties when during my academy-days on the Rietveld Academie in Amsterdam I made my first ' Grand Tour' through Italy. When I visited Florence I was struck by a fresco of the early fourteen century painter Taddeo Gaddi in Santa Croce where he painted an 'Annunciation to the shepherds-scene' . 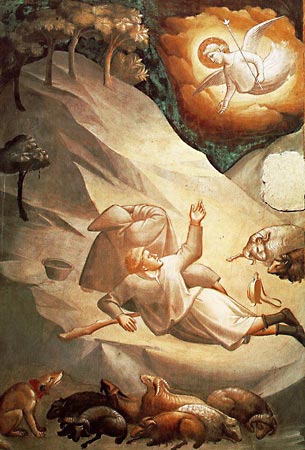 I was so much touched by the way Taddeo painted the soft warm light which comes from the angel and shines on the hilly landscape and the sleeping shepherds! This mysterious light which illuminates the scene never disappeard from my memory and I think I'm still trying to find this magic in my own 'Nocturnes'. 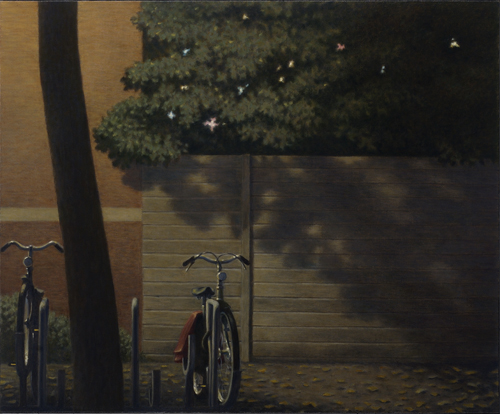 After this incredible encounter with the 'Annunciation" I found more inspiring 'Artists of the Night' like Alfred Hitchcock. In his films full of suspension I find the same fascination for the 'Dark' and the 'Light' of street-lantarns and lighted windows. 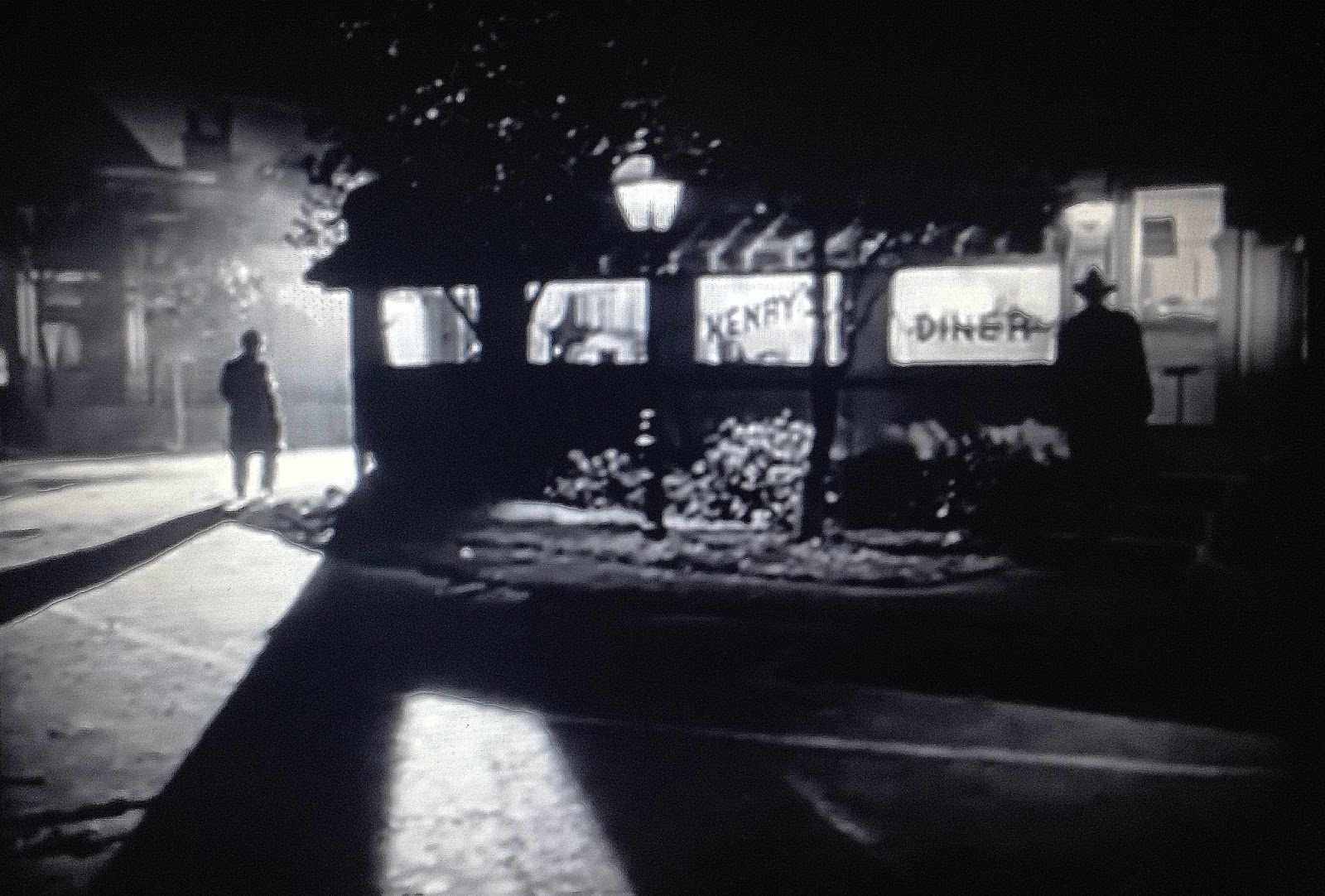 He actually paints his night-scenes with the camera! His scenes are carefully composed in the studio to get the long shadows which makes his films so captivating. It is well known that Hitschcock got his inspiration for these street-scenes from the Amercan painter Edward Hopper who also was a true 'Artist of the Night'! 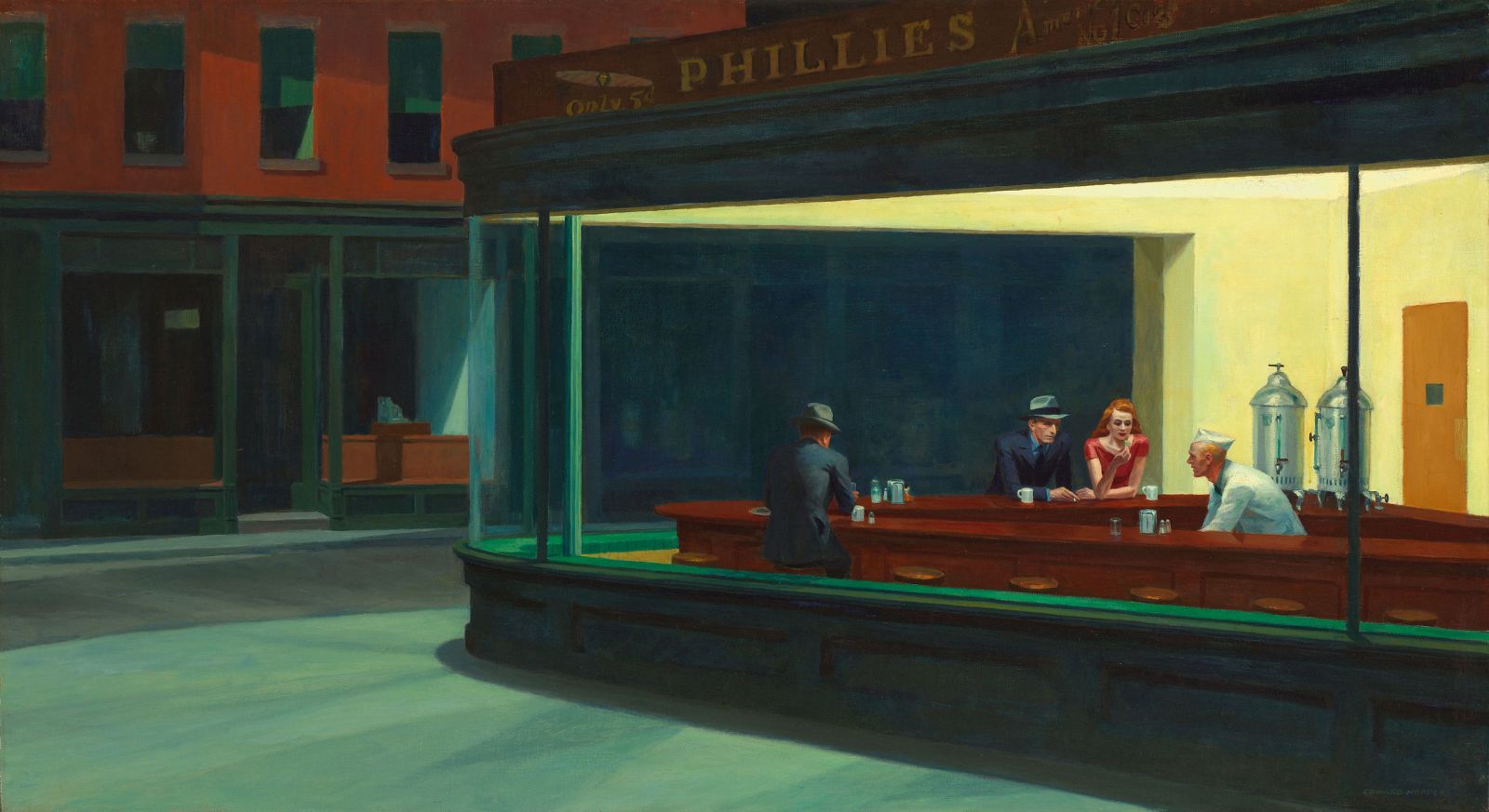 One of Hoppers best Night-scene is the painting 'Nighthawks' (other name for prostitutes) where he shows the true mood of a dark lonely street with a brightly lit 'Diner' where a lonely man had picked-up a woman. The reflected light on the pavement outside is particularly well observed and beautifully painted. Also it seems that Hopper carefully re-composed the light-effect in his studio to get a strong expression of solitude. 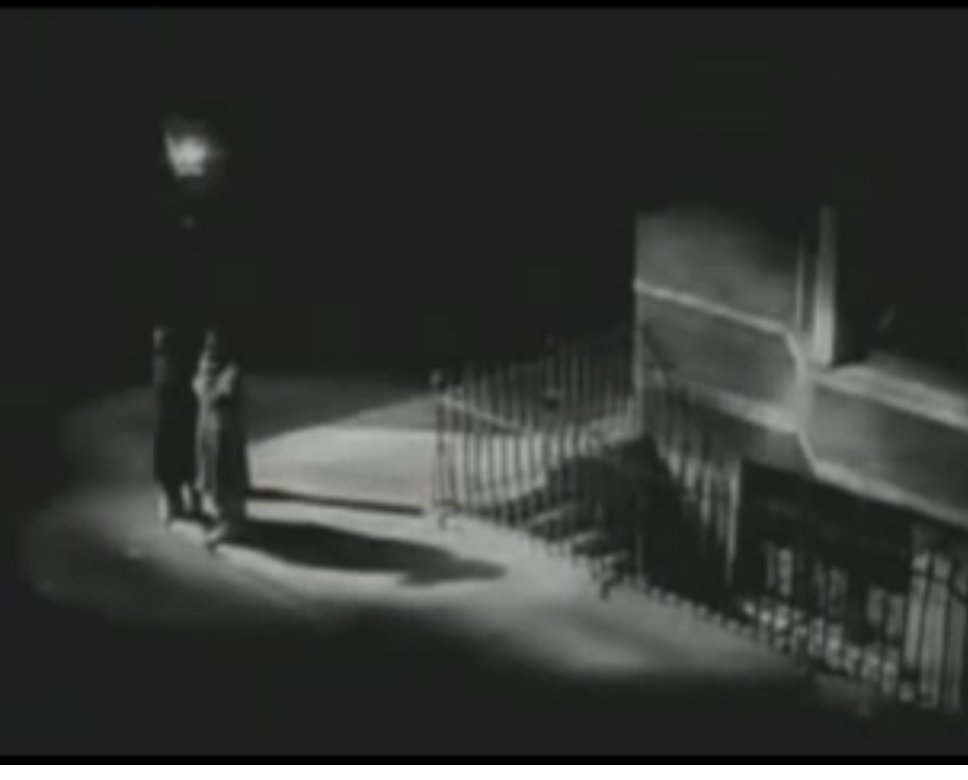 Hitchcock also made in one of his films ' The 39 steps'  an almost complete copy of an etching of Hopper in which he shows a breathtaking scene of a walking man on a streetcorner. Hitchcock although using the same kind of light and almost similar place, changed it towards two men waiting for the protagonist  Richard Hannay underneath a street-lantarn. 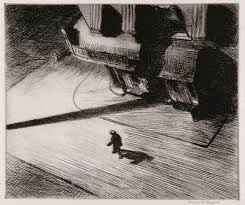 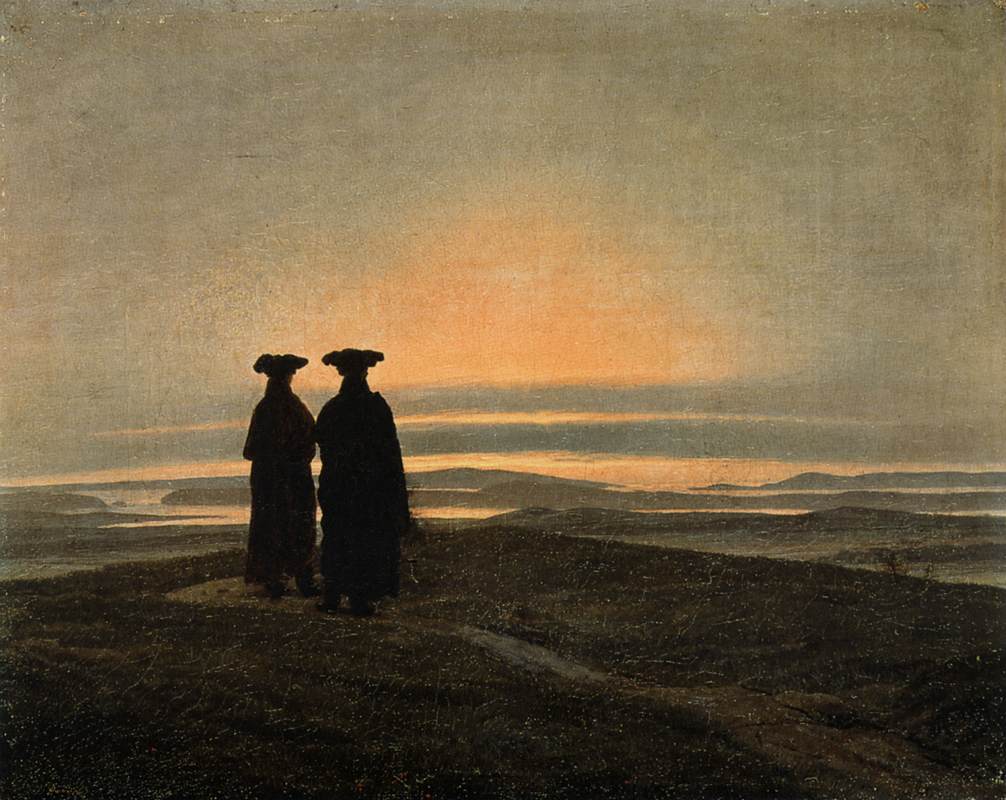 Although 'night-scenes'were always painted through the history of Art, The romantics used this form of 'mood-expression' quite often. This famous painting made by Caspar David Friedrich with two (philosophers?) looking out towards the sunset gives a particularly reflective mood to the atmosphere of the painting. This was also the time (early 19th century) that Wolfgang Goethe wrote his 'Farbenlehre'wherein he stated that the 'true'colours Blue and Yellow are seen at sunrise and sunset, in other words between light and dark. 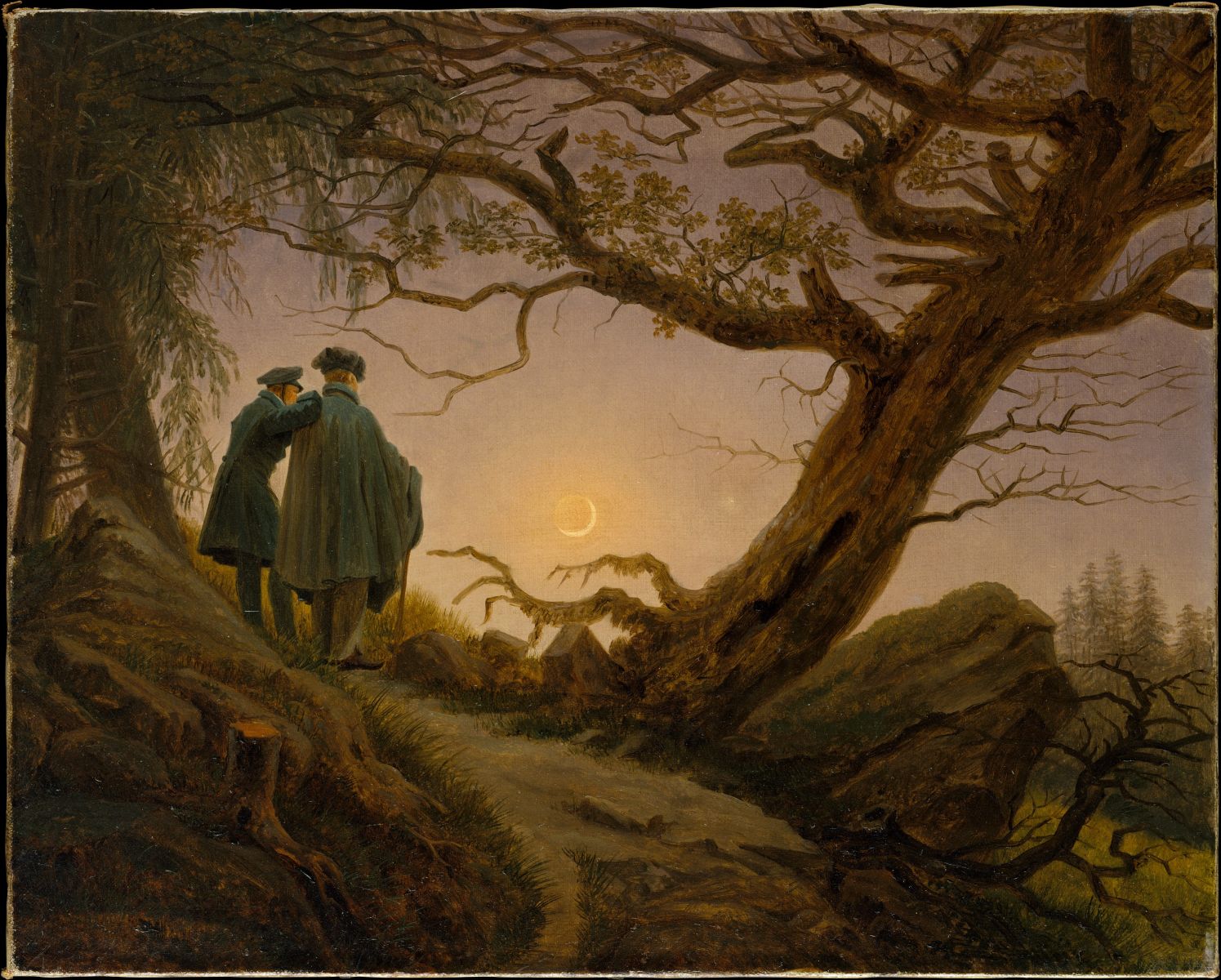 Goethe puts in his 'polarities' the different moods we all experience in these precious moments. In the 'Hymns to the Night' the poet Novalis (early 19th century) expresses these feelings profoundly in verse 2; "Must the morning always return? Must the despotism of the earthly never cease? Unholy activity consumes the angel-visit of the Night..........".For the Romantics 'Night' had as well the security of the all surounded darkness like the market-scenes of the Dutsch painter Petrus van Schendel, as the unsuspected abyss of an unknown 'nightmare' like the Swiss/British painter Johan Heinrich Fusseli . 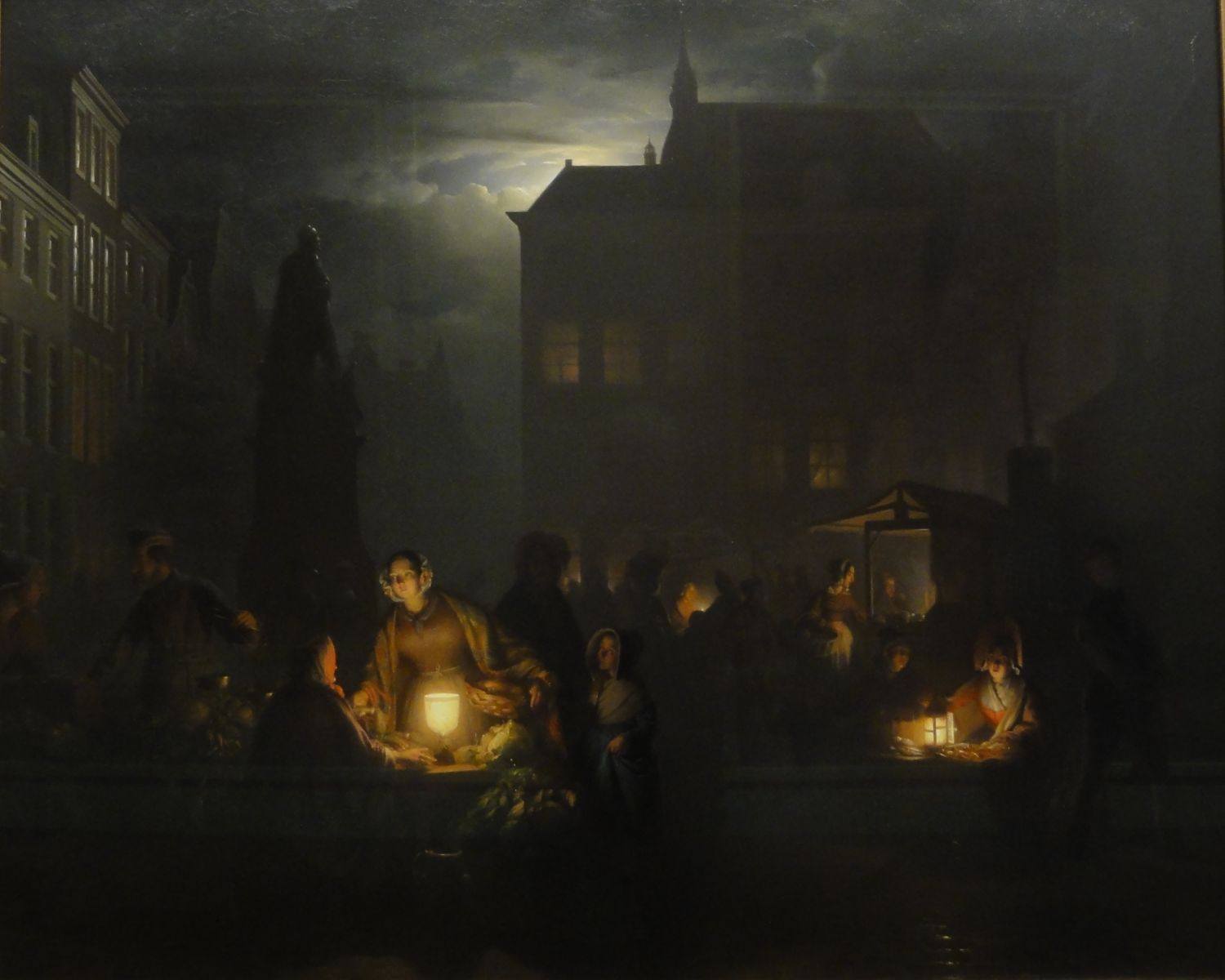 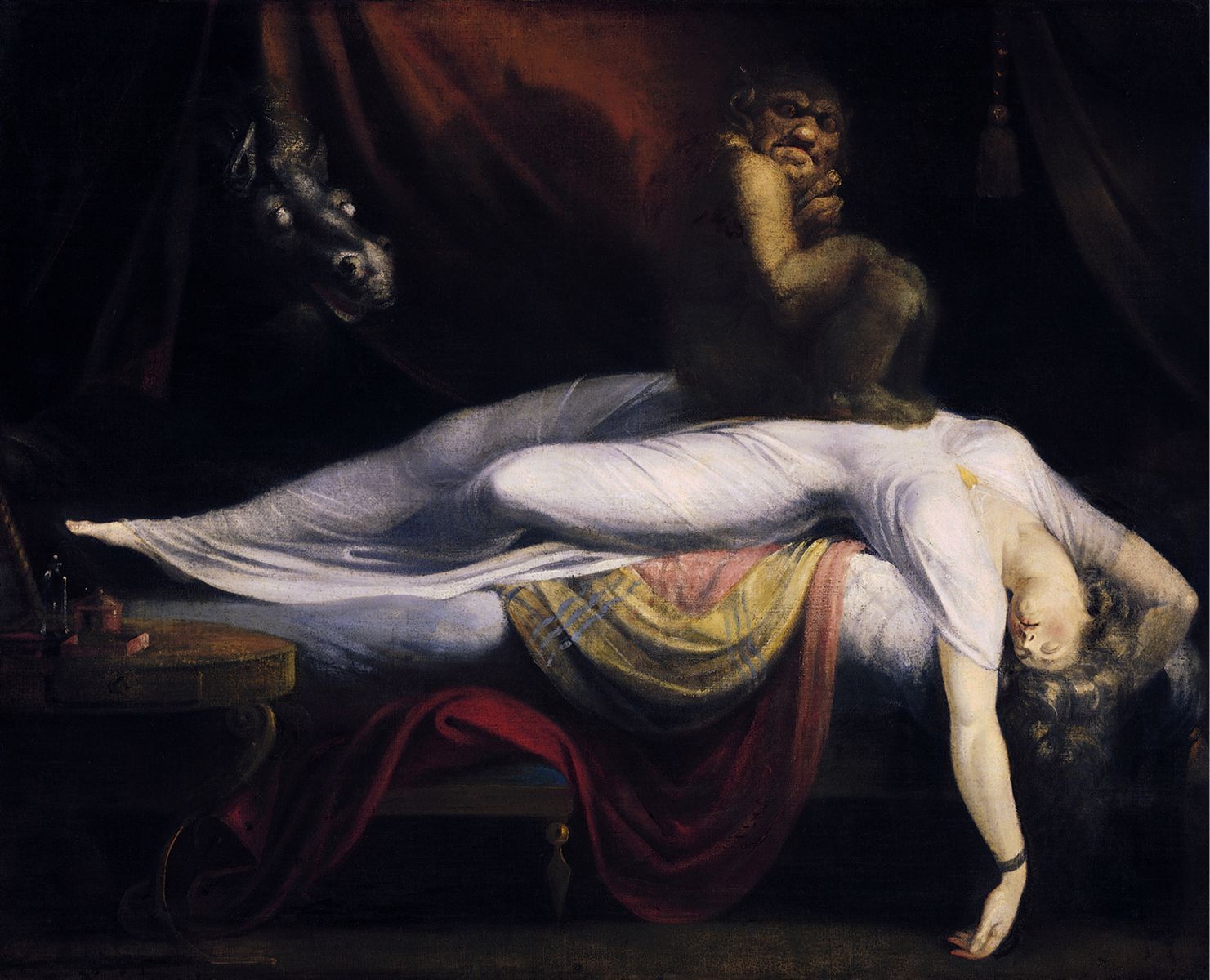